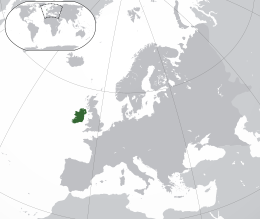 Ireland is an island in the North Atlantic. It is separated from Great Britain to its east by the North Channel, the Irish Sea, and St George’s Channel. Ireland is the third-largest island in Europe.

Politically, Ireland is divided between the Republic of Ireland (officially named Ireland), which covers five-sixths of the island, and Northern Ireland, which is part of the United Kingdom, in the northeast of the island.

Ireland today ranks amongst the wealthiest countries in the world in terms of GDP per capita and in 2015 was ranked the sixth most developed nation in the world by the United Nations’ Human Development Index.